The number one cause of water leaks today and moving into the future will be the aging infrastructure. “A large part of the US public water system dates back to the years shortly after World War II, therefore, a significant amount of buried infrastructure is at or very near the end of its useful life.” – Qureshi & Shah, Journal AWWA. When aging infrastructure is combined with environmental factors the results can be catastrophic; corrosion holes or failing joints and cracks caused by shrinking and swelling of necessary support soils due to significant rain or drought events or extreme temperatures. Failing valves and fire hydrants are a part of the aging infrastructure that will result in a leaking water system.

Human error can be an unpredictable cause of leaks. Poor construction and repair methodology can allow problems to appear in unexpected locations. If the manufactures instructions are not followed it can result in an almost immediate failure or a shorter than expected useful life in problem areas that management and crews feel has been remedied. Other utilities working near your pipeline can cause damage with heavy construction equipment when trying to repair their own infrastructure. Often time water mains and other utilities are poorly located by ineffective “call before you dig” services which instill a false sense of confidence for repair crews that may be digging in the vicinity of your pipelines. Water hammer or pressure surge caused by the exercising of valves is another potential cause for water leaks. Water hammer causes pipelines to fail, often disastrous, because of the huge amounts of kinetic energy that is generated when large amounts of flowing water is suddenly stopped (valve closing) or released (valve opening).

A two-gallon per minute leak will lose more than 1 million gallons of water in a year. No matter the cause of your water leaks, a systematic approach to finding and repairing them cost efficiently is imperative. Scheduled maintenance (leak detection and repair) is estimated to be five times cheaper than emergency water main failure. How much are your leaks costing you? How much time, money, and public faith are your emergency main breaks worth? Stay tuned for our next write up about water leak detection systems: walking around until your feet get wet, divining rods, ground and valve microphones, coorelators, infrared, and in line techniques. 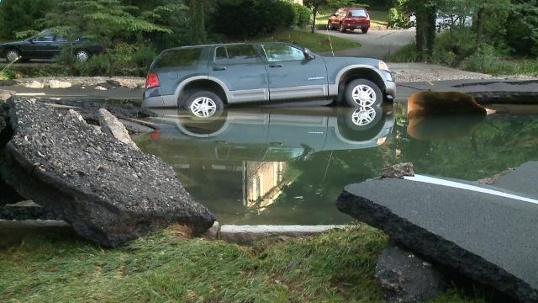